It's all about Constraints! A Recap of the Beyond Tellerrand 2019

For the past two days, I had the pleasure to attend yet another Beyond Tellerrand. It's been the third year in a row that I attended the conference in Dusseldorf and I wanted to share some of what I've seen and heard and why I will definitely be back next year!

The ubiquitous theme of the conference this year was - Constraints! What they are, where to find them and how to deal with them. While feeling constrained by external factors might be uncomfortable for designers and developers, they can actually be a good thing. 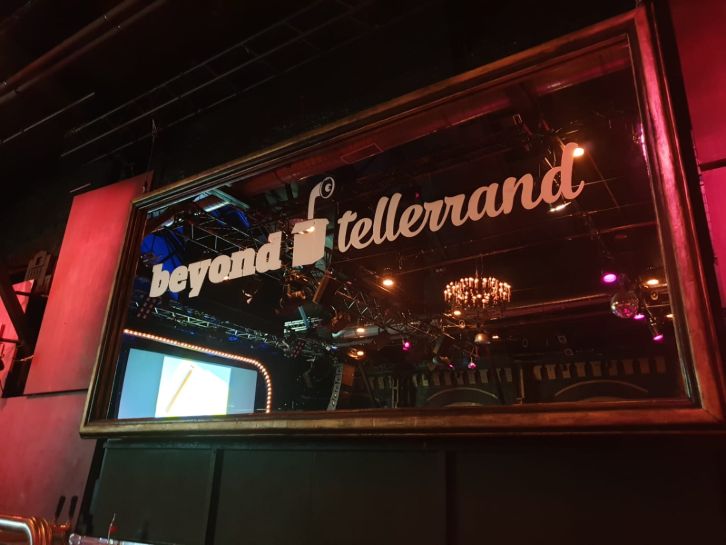 Charlie Owen used a famous anecdote about Ernest Hemingway to illustrate how limitations can have a positive impact on your creativity. Hemingway was supposed to come up with a story that had a maximum of six words in it. While this may seem impossible at first, this example showed how constraints can influence the creative process and produce great results. The final story - "For sale: baby shoes, never worn." - is today considered one of the prime examples of Flash Fiction.

You could find the theme that Charlie has set in many of the following talks. For instance David Carson presented the work he produced over decades and explained how he deliberately broke with the constraints and guidelines of his time to deliver unique and different work. Meanwhile Red Hong Yi committed herself to only using socks for one of her art projects - and it turned out amazing.

Another session I really liked was Stephen Hays explaining how conventions can not only take away critical but also creative thinking, and thus have a negative impact on the diversity of the web.

Stephen said that while conventions may have a time and place to be applied, it's still useful to push back when someone asks you to blindly implement a feature in a specific way just because "everyone does it that way". Instead, he suggests to stop talking about the solutions to a problem right away and start focussing on the actual problem at hand. This allows you to find evidence on why a proposed solution is considered to be the best. I really like how Stephen emphasized that critical thinking and exploring different solutions to a problem is the only way you learn and grow.

Another highlight for me was Mike Hill's talk about "The Power of Metaphor". This talk is probably the reason why I won't be able to sit down and "just watch" a movie in the future. ;)

Mike did an excellent job presenting how movie makers use a common template called the "Monomyth" to tell their stories. He used examples like Star Wars and The Dark Knight to demonstrate how these movies embody the Monomyth in their very own way, why this plays an important part of their success and how this enables them to influence a large percentage of today's society.

As you might notice, many of the talks have a low technical focus. Fortunately, there are talks that satisfy my nerdy needs as well. Shirley Wu, for example, presented some of her amazing work on Data Visualisation, even live coding on stage.

Zac Leatherman and Heydon Pickering continued this trail and talked about Font Loading on the Web and using Flexbox to implement a switch between horizontal and vertical layouts without the use of media queries. Both talks were extremely entertaining due to the nature of the speakers, even though some might argue that Heydon's video compilation was a little bit over the top. ;)

The conference ended with another great talk by Tantek Çelik. His talk can be broken down to a huge "FUCK YOU" to social media. Tantek pointed out what most people already know but like to ignore - how social media can actually be damaging to people and communities.

He urged the audience to go back to owning our content on our own, personal websites and participating in the IndieWeb as a first step to "taking back our web".

In Conclusion, it was another year of awesome, highly inspirational talks and speakers. While, of course, the Beyond Tellerrand as a conference is not without flaws (uncomfy chairs, anyone?), the positive atmosphere and people especially make this event unique and one of the best out there.

Thank you for reading! If you have feedback of any kind or just want to have a chat, feel free to reach out to me. You can find my contact information below.